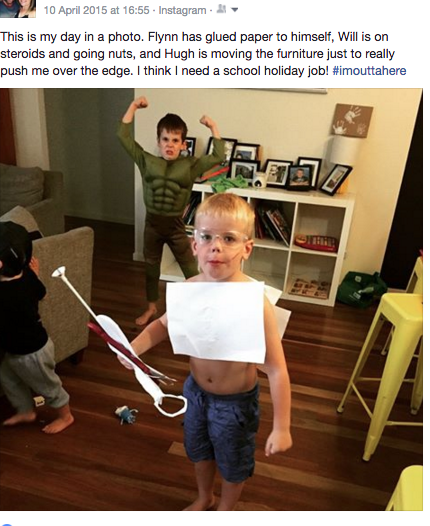 I remember this day so well. I remember taking this photo to send to my husband who had been dodging my calls all day. He was dodging the calls because he knew I’d be asking how many hours, minutes and seconds it would be until he returned to the trenches and helped me with the battle of dealing with our housebound, cabin-fever raged boys. I remember that it had rained for days, and that our eldest had been to hospital with asthma and was supposed to be “resting”. The steroids he was on prevented such activities, and instead he used our furniture as a trampoline and his brothers heads to steady his leaps from one lounge to another.

Seeing this Facebook memory on my newsfeed today made me realise how quickly we’ve left this stage. Two years on and my boys are so much bigger and are able to occupy themselves for much longer than they could then, but sometimes these holidays are a real drag.

School holidays always bring mixed feelings for parents who are teachers. We are constantly told how lucky we are to be with our kids in the holidays, and I KNOW that I’m very fortunate that I don’t have to worry about having to send them to vacation care or pay for babysitting. I’m very grateful to have this time with them, and I try to pack in as much as we can to make the most of this time, but sometimes I feel like I’m here just to provide entertainment for my children all holidays.

I’d just like to have a day of peace in  our holidays. Or just less fighting at least. I have booked my boys into vacation care for a day so that I can get some work done, because teachers do have a lot of work to do in their holidays. I love the idea of sitting my boys down in front of a great movie on a quiet afternoon so that I can get all of my work done, but that just doesn’t work. You see, my boys are not impressed by movies. In fact I don’t think they’re that impressed by a whole lot apparently.

So tonight I sat at the dinner table and watched my little treasures hate on the food I just lovingly cooked them and decided that after the afternoon we’d had, enough is enough.

We’d popped out to Target to get some new pillows, which was pretty exciting for me because I don’t remember the pillows we currently have coming into our lives, so it’s safe to say it had been a while. It didn’t actually occur to me that it was a bad idea to take all three boys shopping. They’re old enough now and capable enough to wander Target for an hour without a major problem, surely? They’re actually not.

There were other children there, they seemed to cope. I became the focus of one mother’s attention when I accidentally used my at home mummy voice instead of my out in public mummy voice. This mother and her neat little girl with perfect plaits enjoyed the spectacle we provided, and their judgemental stares became the inspiration for my mini easter egg binge on my way home.

My mum was onto it, she called me when I was looking at wine glasses, which I hadn’t planned to buy but felt the sudden urge to upgrade to bigger, better glasses than the inadequate ones waiting for me at home, “Oh Claire, why didn’t you leave them with me? Why did you take them there?”

I didn’t have an answer, I didn’t even think about it. I didn’t think about whether or not they’d enjoy it, I just thought they would be fine for an hour of shopping. My head wasn’t yet in holiday mode, and I was foolishly doing something for me rather than providing them with the best day of their life. Again. I snapped,  “I have to go Mum. Flynn’s swinging a mattress protector around (that I now have to buy because he broke it) and we’re in the glasses section…”

It was then that I realised that we didn’t do that when we were kids, we didn’t go to Target, or anywhere really. We didn’t have lots of expensive days out either. We probably went to the movies once, and probably Maccas at some point. Once every couple of years we’d go to Australia’s Wonderland for a day out, or to Sydney on the train, but those days were rare.

My kids wake everyday and ask what our plan for the day is, they absolutely expect some impressive itinerary filled with expensive excursions to fill their day. We had two options as kids- front yard or back yard. I’m sure there was more to it, but most of my memories are just playing at home, or visiting Grandparents. When did it get to the point that I have to remortgage my home just to amuse my overindulged children?

So as some type of promise to myself, here’s a list of things I’m NOT going to do these holidays…

I was thinking about all of this last night as I was tucking all of my cherubs into bed and was instantly overcome with guilt. From past experience, this is a popular time for mother guilt to kick in for me, and I usually end up wishing I’d been a calmer, kinder, more fun mum as they beg me to read just one more story.

I do know how lucky I am, I’m grateful to be able to be home with three (relatively) healthy children and to have this time together. But last night, just as the guilt was really kicking in, I started reading a book to my youngest and felt that it was a sign from the universe…

Oh AMEN to that Mrs Fox! Freddy sounds like a bit of hard work.

And just like that I snapped out of guilt and back into determination mode. Thanks Mrs Fox!

I hope the “holidays” are kind to you, and remember, the days are long but the school holidays are short.

One thought on “School “Holidays””